A Sweet Peek Into Our Life

For almost 5 years it was just the two of us- every invitation, card, and reservation read only "Seth and Chelsi." When Harper was born we realized that we would now be checking the plus 1 box and we couldn't be more excited to do it! Now we're checking the plus two box with Sam! Our plus two makes every day an adventure and we hope you enjoy this glimpse into each new experience!

Mimi and G though Harper and Sam would have fun going to Baylor’s Homecoming Parade. It was a little windy, but they got dressed up in their BU getups to cheer on the Bears. Reports were that they had a blast! Here are a few pre-parade photos. Harper may have been a tad aggressive with Sam, haha. 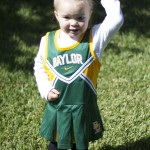 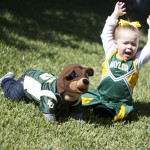 What’s on my head?